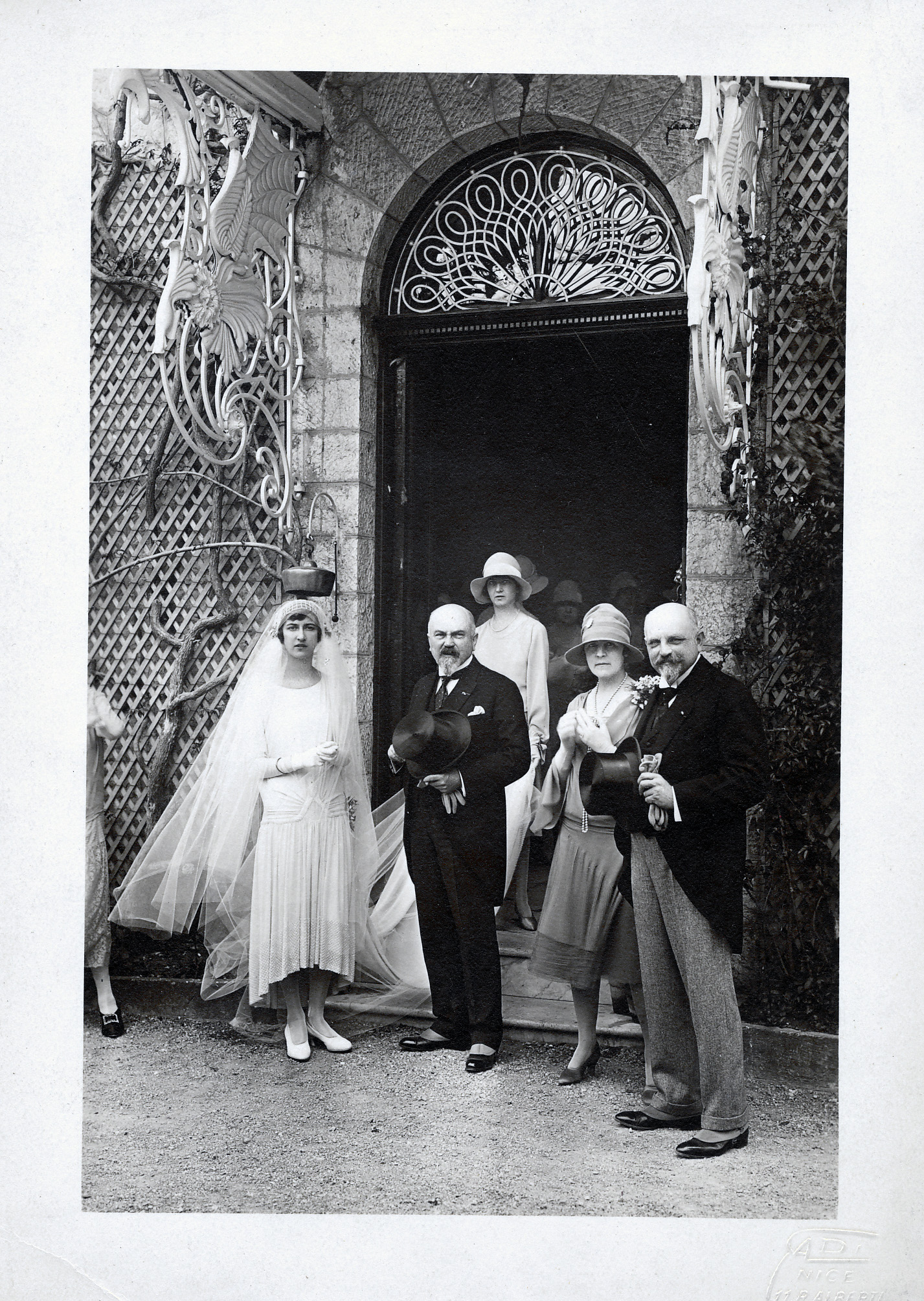 Cognac De Haartman was shipped to The Russian Tsar Nicholas II and the Russian aristocracy. Unfortunately, it never reached Saint-Petersburg. The shipment was sank by a german U-boat on 19th of May 1917 in the Baltic sea and was recovered 102 years later.
300 original bottles was saved from the wreck and rebottled with fine cognac from approximately the same period of time.
The packaging is identical to the original bottles.

Experts and archivists figured out that the precious alcohol cargo was intended to the Tsar Nicholas II and his family. The ship was due to arrive in St. Petersburg in December 1916. The shipment was postponed due to difficult ice conditions, and the ship did not leave for the Nevsky shores until May 1917.
But it never reached the Russian port. 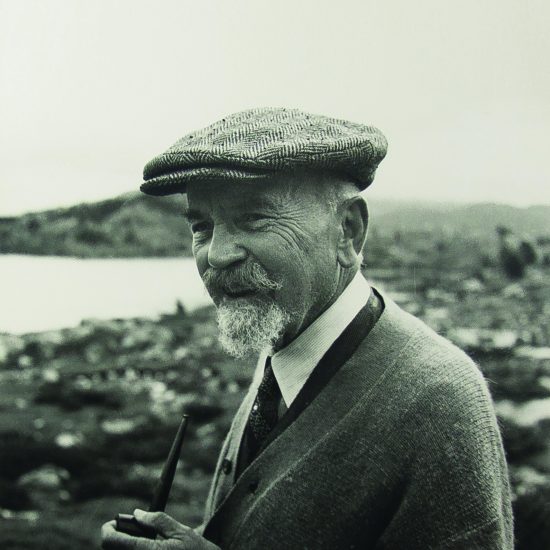 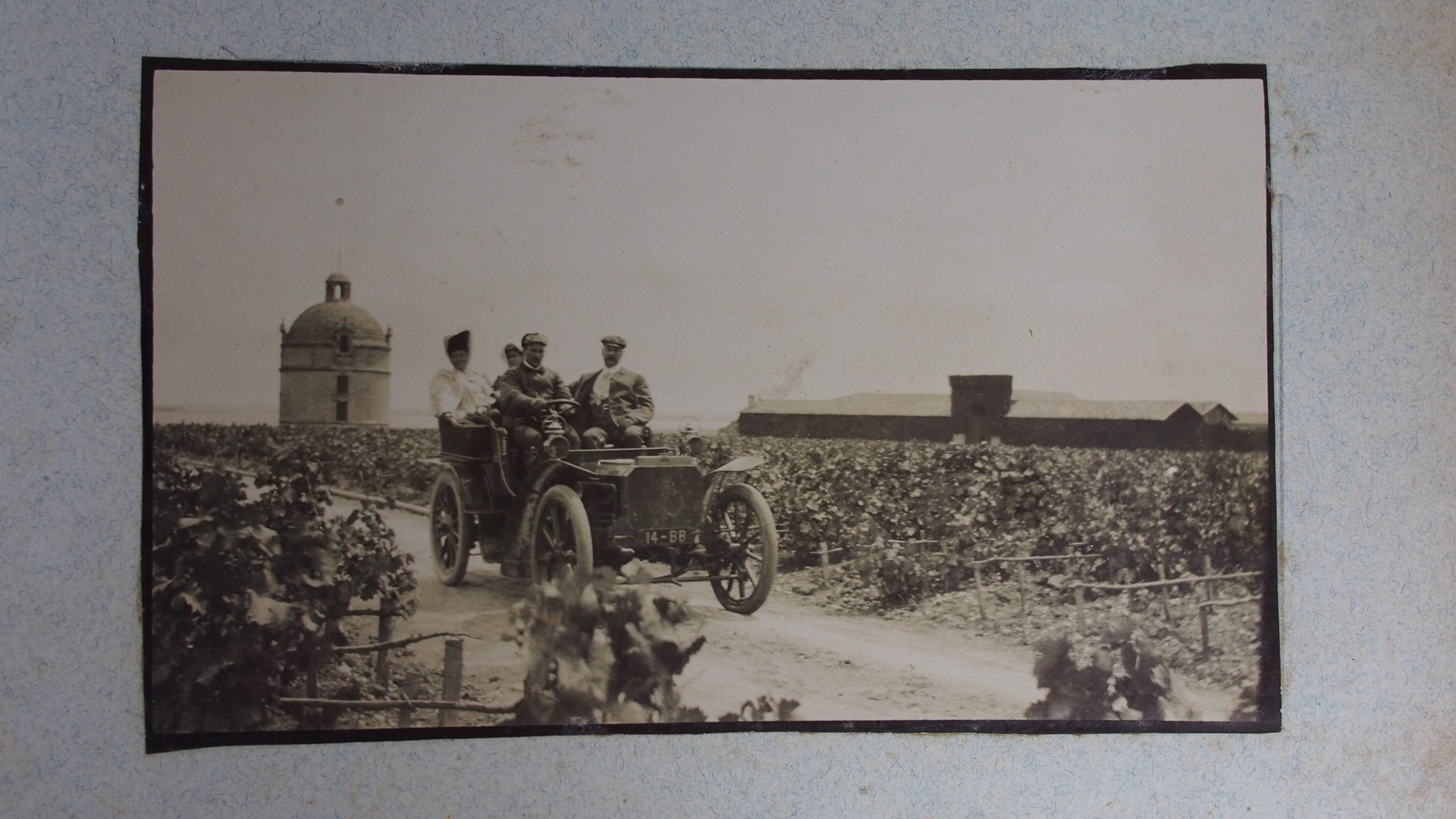 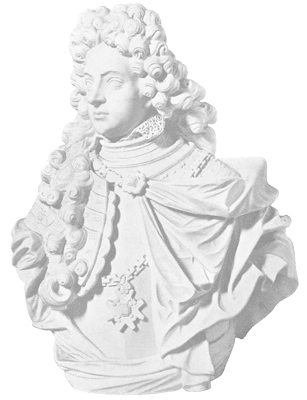 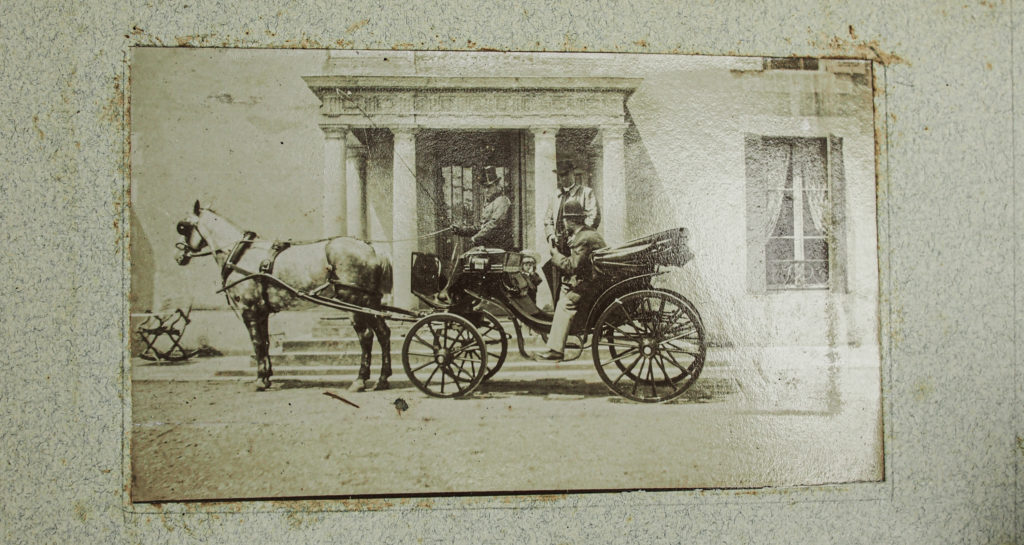 Halfdan arriving in his new home in Cognac

Halfdan arrives in Cognac and starts his own companies Birkedal Hartmann and Hartmann Fils & Frères.

Halfdan starts his new offices in Bordeaux, only 90 km from Cognac.
In the middle of the Winemerchants district in Bordeaux, 28 Quai des Chartrons. 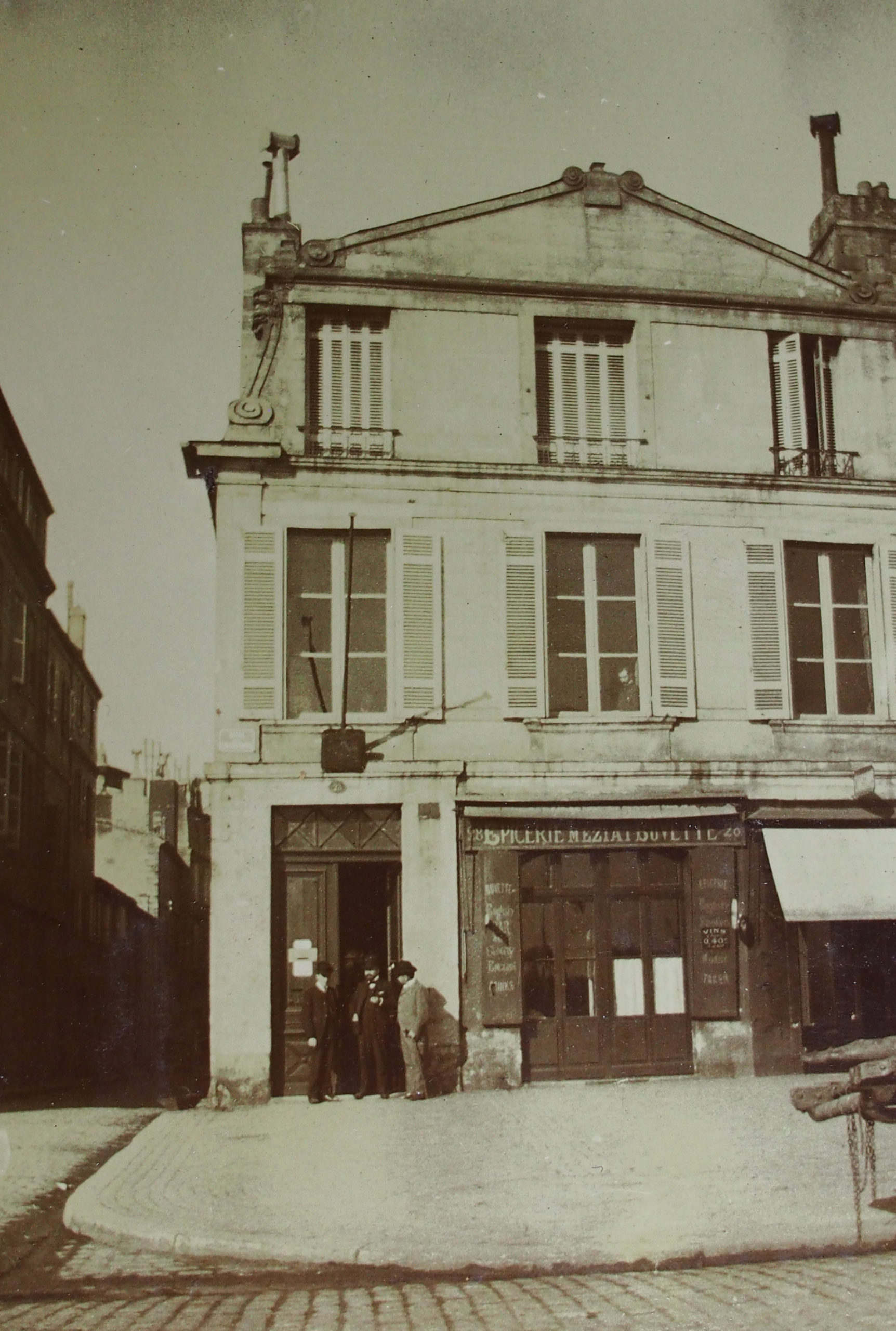 Halfdan in front of his new offices in Bordeaux 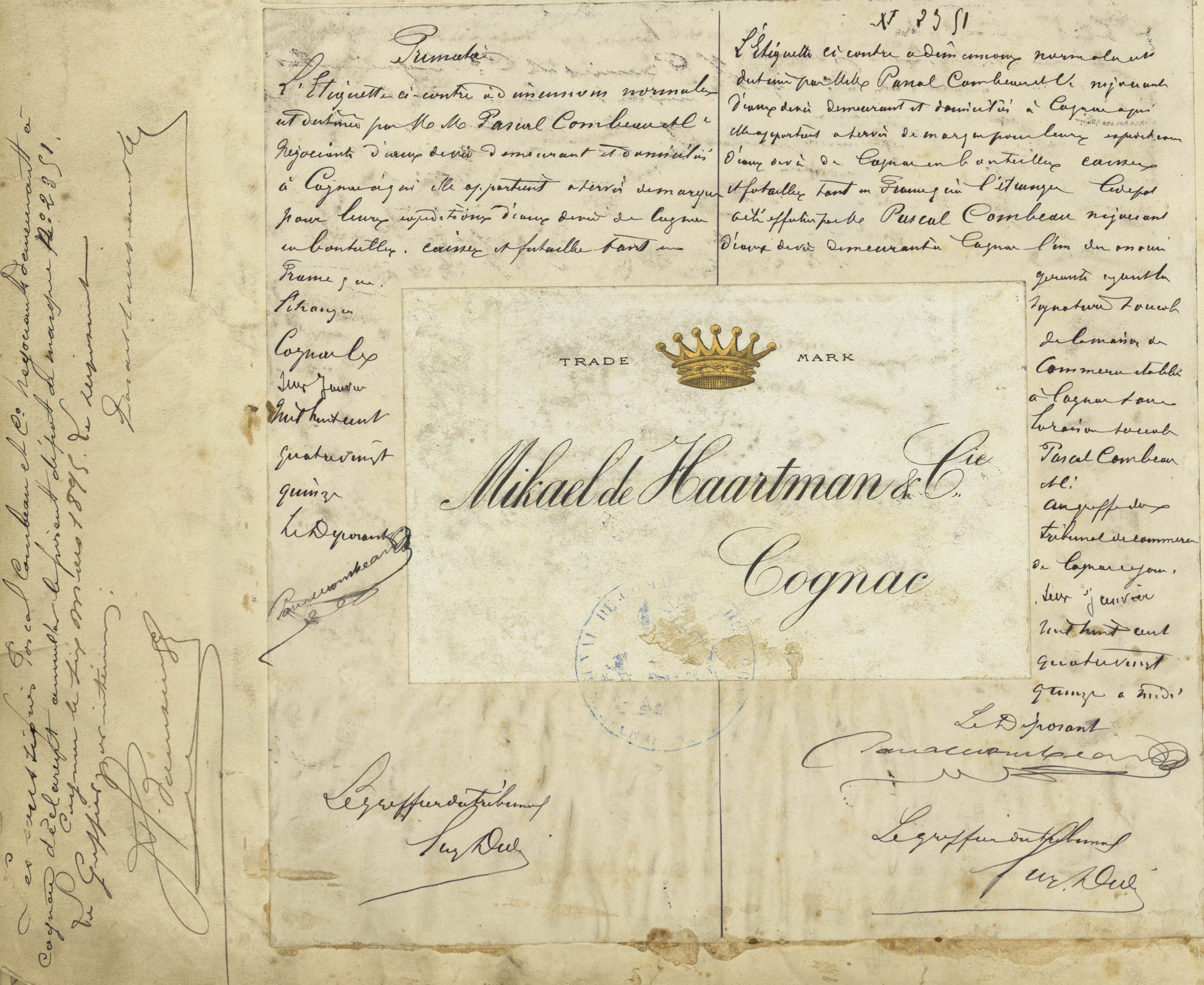 New Sorts in the Vineyard

Hartmann Fils et Frères is now a very successful company doing business worldwide. Many private and customer brands are created and one of them is the Cognac brand De Haartman, made for a private importer located in Russia which later became Finland. The brand de Haartman was registered first time in 1895.

First world war breaks out. Birkedal Hartmann has to postpone shipments all over the world except to neutral countries. Sweden being neutral, it becomes a hub for deliveries to all the northern countries. 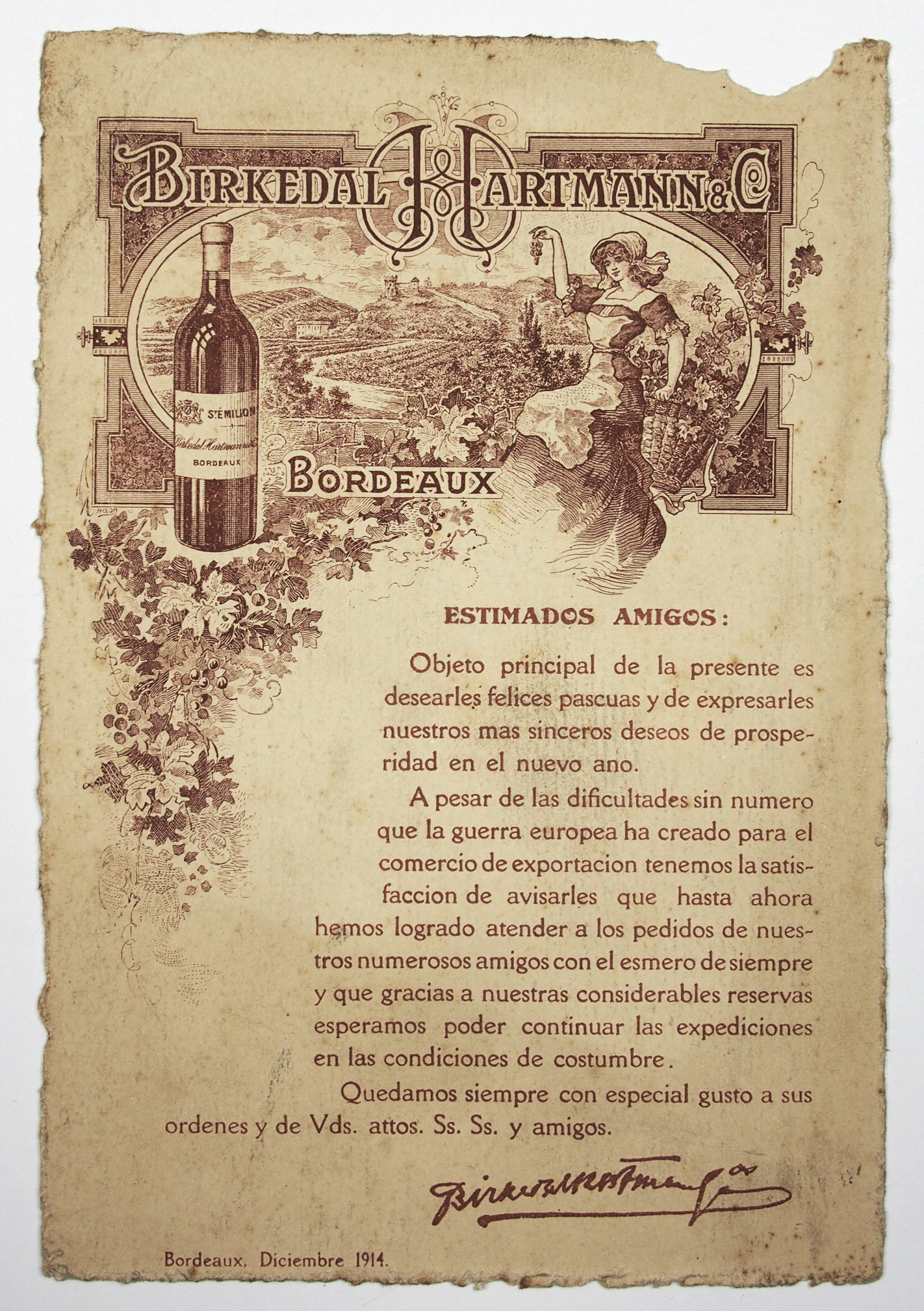 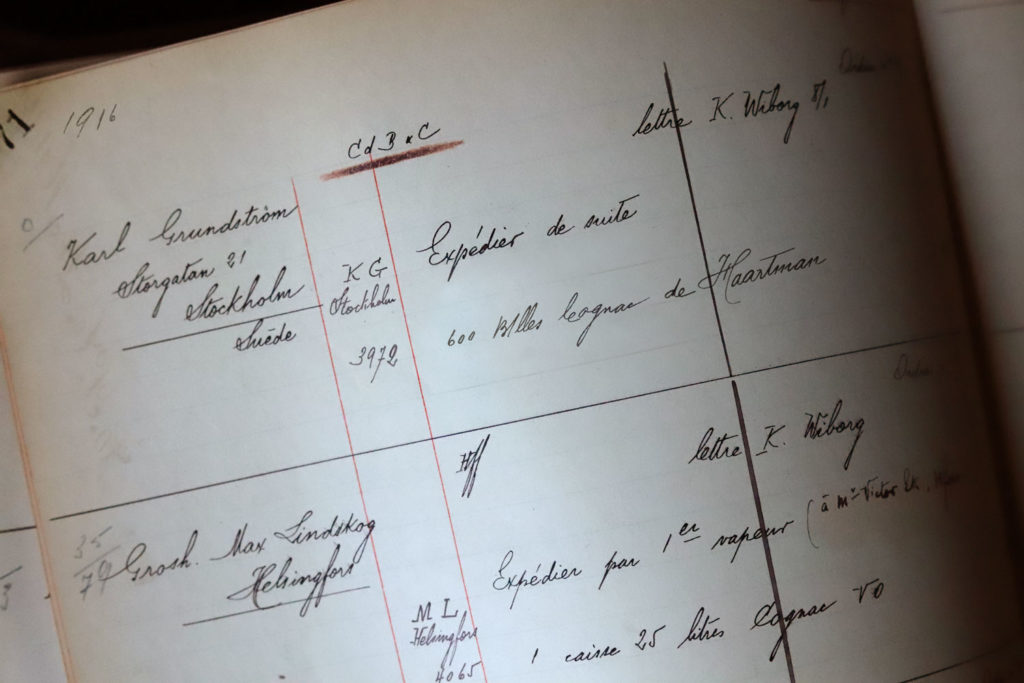 A shipment of 600 bottles of Cognac de Haartman left the cellars of Hartmann Fils & Frères in Cognac to be loaded on a ship in Bordeaux with destination St Petersburg. The final client was the Tsar Nicholas 2 himself but the importer and organizer of the shipment was De Haartman Wines & Spirits, located in Finland which at the time was a Russian province. Due to a heavy ice situation in the Sea of Bothnia, the ship had to unload in Stockholm, Sweden and wait for warmer weather.

The date was May 19th, S/S Kyros was on its way from Stockholm to St Petersburg to deliver an important shipment of 600 bottles of Cognac de Haartman to the Imperial Court. Reaching the Aland island the ship was stopped by a german U boat UC 58. After checking the cargo, the german Captain decided that the goods was smuggle goods as the destination was St Petersburg and ordered the ship to be sank. The crew was spared but S/S Kyros with its valuable goods was sanked 77 meters under the sea. 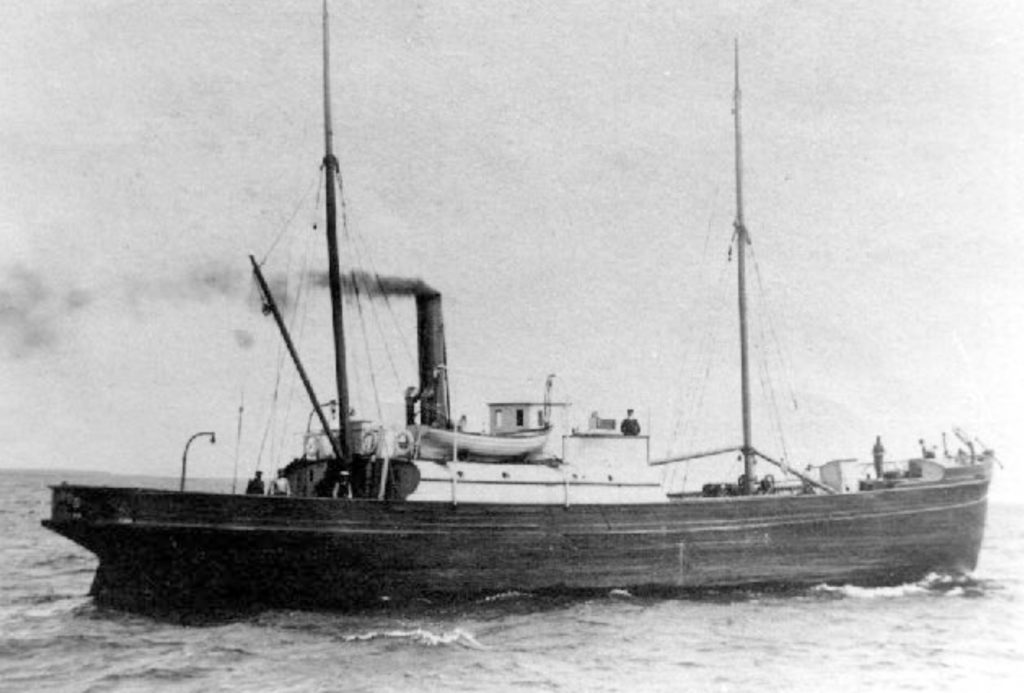 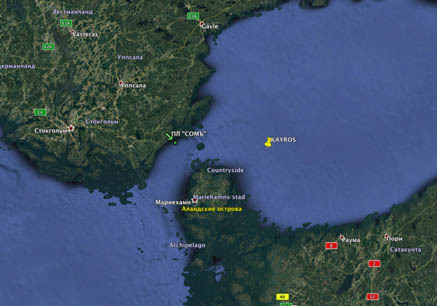 Swedish shipwreck explorer Peter Lindberg located s/s “Kyros” as well as several other shipwrecks sunk by UC 58, but did not have the possibility to explore them. 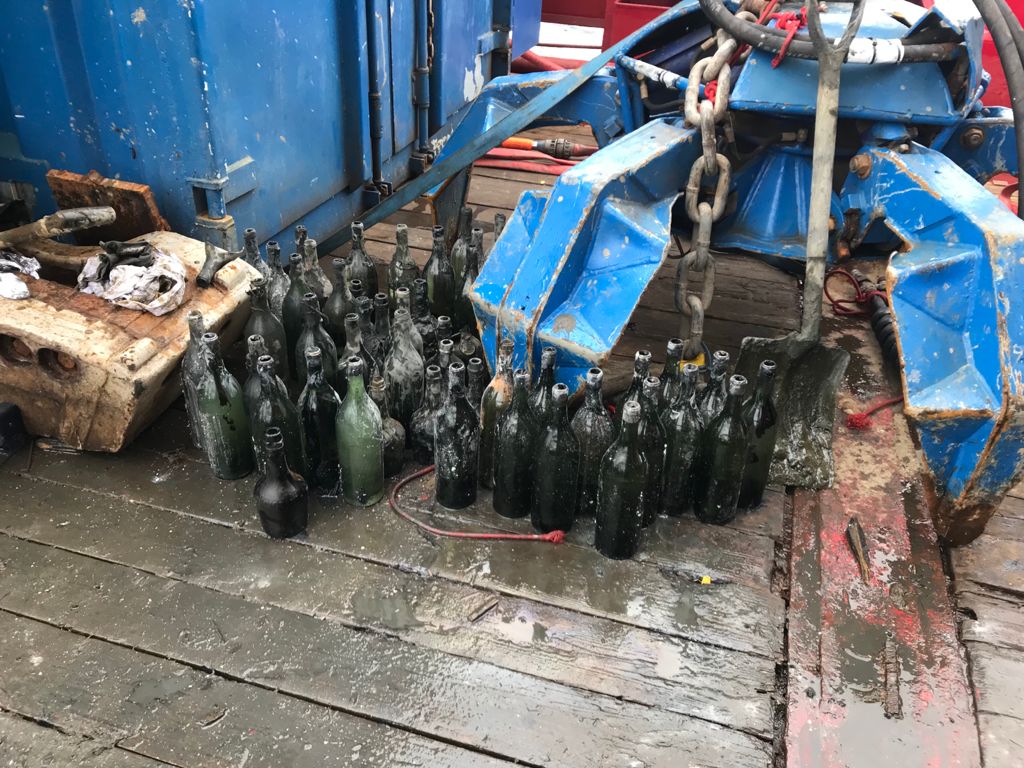 The Cognac is salvaged from the shipwreck and the worldpress is mentioning the event. Birkedal Hartmann is contacted by the press to know if the Cognac is coming originally from them.

Documents about the original shipment are found in the Birkedal Hartmann archives as well as copies of the original labels. De Haartman brand was created as a private label for the Imperial court. 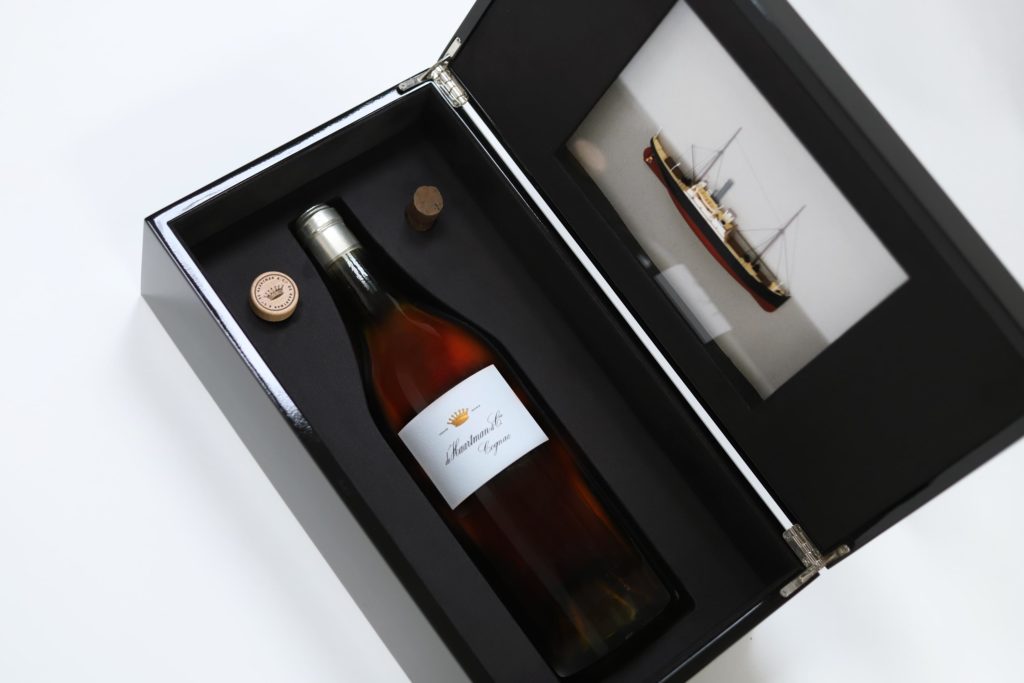 Alex Max Mikhaylov, owner of iXplorer contact Kim Birkedal Hartmann to let him know that he has saved 300 empty bottles of De Haartman and also have the proof that the Cognac is coming from Birkedal Hartmann and Hartmann Fils & Frères originally. They decide together to recreate the original bottle with Cognac dating from 1910.

At the end of 2019, I suddenly received many calls from the press worldwide asking me if the Cognac De Haartman just discovered and saved from a Shipswreck in the Baltic Sea came originally from our company. I was not sure what they were talking about and diplomatically answered that we had to check it out in our archives. The brand de Haartman did ring a bell as I have been through our 1500 company labels many times since the company was created by my great grand father Halfdan Birkedal Hartmann in 1887, in the purpose of finding inspiration for new labels.

However, and even though I was curious to know, we did not find any trace of this label until we discovered it as private client label that my great grand father Halfdan did a lot of, in order to be able to ship to several importers in the same country and give the exclusivity for the brand and the country.

De Haartman Cognac was a small simple label, noted 3 Stars in our books and nothing showed even signs that the Cognac was intended to the Tsar Nicholas II of Russia. Halfdan Birkedal Hartmann had previously supplied Burgundy and Bordeaux wines to his Importer in Finland, De Haartman Wines & Spirits who was the supplier of Wines  & Spirits to the Tsar Nicholas II. Until 1918, Finland was a Province of Russia.

Well, we thought this was an interesting story and we had great pleasure searching in all the old documents finding even records of the shipment.

Until we were contacted by Alex Max Mikhaylov,director of IXplorer who had identified our company as the supplier of the shipment.

His proposal was very simple. Out of the cargo of 600 bottles, 4 bottles were still full and in good shape and were quickly sold to collectors.

He had managed to save 300 empty bottles from the wreck under extreme dangerous conditions and believed we could maybe supply a cognac of the original age of the sunken shipment.

The Cognac itself is approximately from the same period of time as the original one, meaning 1910, and you can find the tasting notes under “Bottle”.

What a fascinating story! We are so fortunate to be a part of this venture going back to the first generation of Cognac merchants who my great grand father was. As we only have three hundred unique bottles available hopefully if there are no breakage we will accept reservation from interested parties.